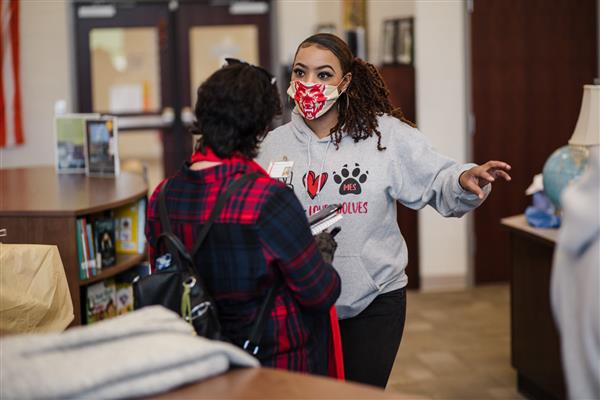 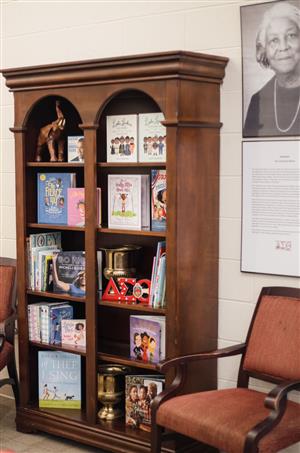 A brand new Book Nook was dedicated to the students of Main Elementary School by the Rome Alumnae Chapter of the Delta Sigma Theta Sorority, Inc. in honor of Mrs. Eva Samuel Martin.  The Nook may be humble in size, but its message is monolithic.

The dedication paid tribute in multiple ways; in memory of a strong African American figure during Black History Month, in honor of past leadership at Main Elementary, and in observance of the 55th Anniversary of the Rome Alumnae Chaper of Delta Sigma Theta Sorority, Inc.

Mrs. Martin, in addition to being appointed Assistant Director of Linguistics Research and Development for Rome City Schools in the 1960s, also served as principal of Main Elementary School from 1963-1967.  The Book Nook is adorned with a black and white photo of Mrs. Martin and a biography on the wall that describes her as "a lady of impeccable leadership, discipline, and determination."

Delta Sigma Theta sorority was near and dear to Mrs. Martin.  After completing her bachelors degree at Clark College and her masters degree in education from Atlanta University, Martin returned to Rome with a determination to begin a chapter of Delta women in Rome (Floyd), Polk, and Bartow counties.  The Rome Alumnae Chapter came to fruition on January 15, 1966.

At the dedication, Rome Alumnae Chapter First Vice President and Co-chair of the Educational Development Committee, Barbara Ford, as well as current President Lauren Livsey, spoke. "These children and this community are a part of my spirit," Ford said.  "So I am here in support as much as I can be."

The quiet Nook in the Main Elementary media center speaks powerfully through its dedication and its literature.  More than 75 profound works, written on an elementary level of understanding, grace the shelves.  Examples include "A is for Awesome! 23 Iconic Women Who Changed the World" by Eva Chen, "Of Thee I Sing: A Letter to my Daughters," by Barack Obama, and "Little Leaders," a two series set including "Bold Women in Black History" and "Exceptional Men in Black History," written by Vashti Harrison.

Leading up to the dedication, several of the Delta sisters were recorded reading some of the books, to be shown to Main students in support of the current virtual learning environment.  Livsey added, "Even as this pandemic is going on, we just want to make sure the community knows we are still out here to serve and to uplift in any way we can."

Assistant Principal, Stephanie Dean, said "Eva Martin's picture is also downstairs, so the students see her every day, they are very aware of her contribution."